30 Minutes or Less Do Eat On A Day Like Today That One Time.... Thoughts Uncategorized Wear

Losing weight is a bitch.

I have struggled with my weight since I was 7 years old. I was a thin child until my eczema got so bad that Dr.’s put me on medication with steroids. I was hungry all the time and turned from thin to chubby very quickly. I endured the chubby jokes, being called a fat girl, a giant, almost every insult you could imagine. Even the back handed compliment, “you’re cute for a big girl” 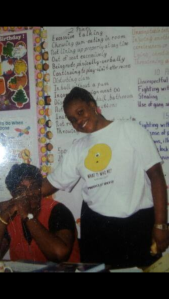 I was looked over because of my weight. Boys didn’t pay attention to me. Not in a romantic way, just as their homegirl. Their fat and funny homegirl. . My parents were very good with telling me I was beautiful and special and building my self-confidence, but when the jokes fly from your peers, it’s kinda hard to hear your parents’ affirmations over the insults.

I had to get my clothes from the Jr. plus section or from the Misses section, at the age of 10. That was so embarrassing and it made me feel less than. I always felt like I had to work twice as hard, be twice as funny, be twice as fly due to my size.

At 14, I had a growth spurt and thinned out just a little, grew some boobs, a butt and I learned how to comb my hair. There was a boy that I liked that liked me back and I couldn’t believe it. He likes me? Chubby Tiora? That couldn’t comb her hair from 7th -9th grade? Now that I look back on it, I didn’t really like him. I liked the fact that someone was paying me attention. And I was grateful for that attention.  And this happened throughout a large part of my life until I started seeing images of plus size women that were desired romantically, not just as the fat and funny homie. Looking at my TV and at magazines and seeing Mo’Nique, Jill Scott, Countess Vaughn, and Queen Latifah in starring roles about being the object of someone’s affection really moved me and I started to feel better about myself.

I walked with a different air of confidence. Like yeah, I’m chubby but I’m cute and I can dress. Who gone check me, boo?

All the years of working up that confidence hit a snag when I met my future ex-husband.

He was a 6’4, athletic built, green eyed man with D2B that had me in a haze. I married him because I thought he loved me and who else was going to ask me to marry them at such a young age (I was 21 and thought that marriage was the end goal and I had reached it early in life)

The ink hadn’t dried on the marriage license when he started to verbally and physically abuse me. He would call me fat. A fat bitch. A fat bitch slut. Told me that no one would want me. Who else would want such a fat woman? I should be lucky that he even married me. I was fortunate to have a husband, since I was fat and all. And I almost fell for the flim flam. I almost believed him. I almost let him take my confidence away. I almost let him trick me into thinking, once again, that I was less than. But I didn’t and I left that terrible marriage and awful man.

I started working out and eating right post-divorce. I did this because I was trying to prove a point. Someone will want me. Someone will think that I’m amazing. I will not be fat. I will not be undesirable. I will not just be used for sex because I’m easy. (Fat girl=easy in some people’s minds because we should be grateful that anyone should even look our way.)

After losing alllllll that weight, I went on a two year party binge to take my mind off of my failed marriage and a short lived super fail of a post-divorce relationship.  I was partying Thursday-Sunday and I had a rotation of men. I could not keep men off me. I gained my 40 pounds back and then some and I didn’t even notice it. How could I? My clothes still fit(kinda) and I HAD ALL THE MENS!!!!

I gained 60 pounds by making bad life decisions (partying, drinking heavily, eating terribly and not working out) and people telling me I looked great. I realized how much weight I had gained and decided right then to make a change for myself.

I was going to lose weight because I wanted to lose it. I wanted to feel better. I wanted to not get winded doing certain things. I wanted to be healthy. I didn’t want to get high blood pressure which runs in my family.

During this time, I gained a friend that showed me what true love was. And I was finally able to truly love myself. So my true journey began. For myself. I was doing it for me, not to show off or gloat or to prove a point.

I joined Weight Watchers, hired a trainer and started going to various classes. I became obsessed.

I would work out two, sometimes three times a day. I would not drink, I would not eat certain things and I lost 40 pounds in about 6 months. And I felt good. I felt great. I was happy with myself but at the same time I was miserable and didn’t understand why. Why am I miserable?  BECAUSE I WANTED A BURGER AND DIDN’T WANT TO FEEL BAD ABOUT EATING IT. I wanted to cook and bake and not feel bad about eating what I cooked because it wasn’t part of my diet. And I wasn’t there. If I ate one bad thing,  I would work out extra hard because I felt bad. I felt like I was letting myself down.

I know I’ve been rambling, but whatever.

I have  finally lost all the weight that I have gained and put back on over the past 6 years.

I’m 30 years old and at a size that is cool but would still like to lose 20 more pounds. Will I struggle with my weight for the rest of my life? Yes. Will I get off track? Yes. Will I eat a cupcake if I feel like it? Yes.

I am truly at a happy place in my life and with myself.

I cannot stress about losing weight or gaining it. That’s life.

I let my weight hold me back from opportunities,  effect my relationships, affect my view of myself, just, let it have too much control over me.

I have spent 23 years battling my weight and will battle it until the day I die.

I get tired. Tired of going to the gym. Tired of running. Tired of eating oatmeal for breakfast instead of a biscuit. TIRED OF GRILLED CHICKEN INSTEAD OF FRIED CHICKEN.

But those are things I will have to do for the rest of my life. I have to live as healthy as I can. Stay active, eat right but allow myself a cheat meal every once in a while because if I don’t, I will lose my mind.

I have shared my progress with people, but not the personal struggle. I’m sharing it now because I know someone reading this is going through the same thing. And it’s ok.

I hate the rapper Curren$y, but I love his motto, J.E.T.S.

Just Enjoy The Shit. Enjoy your life. Keep a good balance. Don’t stress. It is what it is. Eat that burger and don’t apologize to anyone about it.